Through my research and through interviews, I found that in the Arctic it is important that all ships communicate well, but also that they use the same language. Especially since different languages ​​can lead to communication failure. After reading The Nauticals Institute’s “Ice Navigator Accreditation Standard”, I gained insight into what standard “language” is and how important it is that all ships traveling in the Arctic can afford this taxonomy to understand each other in communication. As icebreakers and ships in the convoy want to communicate in my concept, I saw the importance of building on these standards. Therefore, the “tags” to the students (in convoy) contain the standard ice-symbol also called ice nomeclature. (read more here: http://www.aari.ru/gdsidb/docs/wmo/nomenclature/WMO_Nomenclature_draft_version1-0.pdf)

I believe it is important to use these symbols so that ships can get a symbolic representation of the ice-type, when language can be a challenge. I also think that it is important considering future communication between ships in the Arctic.

Ice class is also an important element in navigation in the Arctic. “Iceclass denotes the additional level of strengthening as well as other arrangements that enable a ship to navigate through sea ice.” (https://en.wikipedia.org/wiki/Ice_class). Therefore it’s highly important that a navigator on a ship is aware of the type of ice the ship can go through, so that the ship avoids drastic accidents such as happened with MS exploder in 2015. MS explorer drove into a thick ice flood in Antarctica, which caused a hole in the hull, and the ship sank. (https://www.aftenposten.no/verden/i/dmX8O/Her-synker-MS-Explorer)

A tagg should therefore include both Ice-symbol, which ice-class the ice demands, the hallmarks so the crew can recognise the ice, and recommended speed to have when breaking through the ice. As we learned when visiting an icebreaker; having the correct speed is crucial to not get stuck. 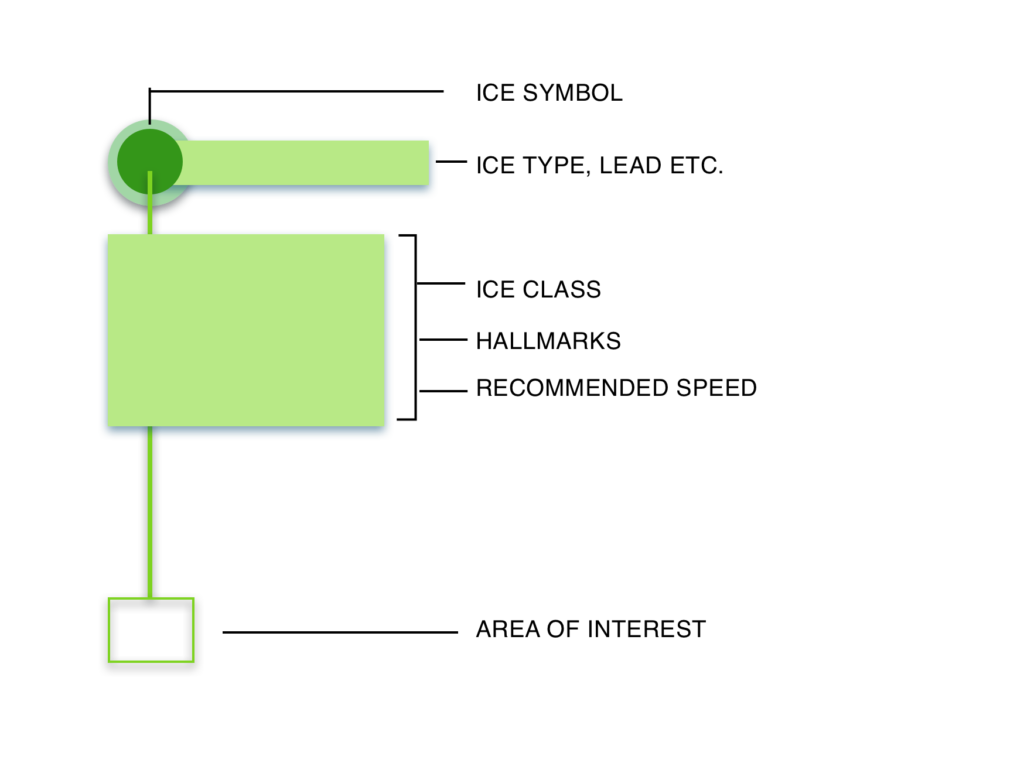 As my co-students Gustav and Chris found out, it is also important that the information is above the horizon, where there is a bunch of space, and do not interfere with whats happening in the ocean, aka. the area where navigators need to have a clear view. Hence the vertical line between the area of interest, and the rest of the information.

The Ocean Industries Concept Lab is a reasearch unit at The Oslo School of Architecture and Design. The project detailed on this blog is a partnership with SEDNA, and features the work of 6 masters students under the supervision of Kjetil Nordby.